A sole ulcer is a deformation or inflammation of the claw dermis which is seen most often in areas where the claw is most heavily taxed. The most common area of the sole ulcer sometimes is also called the typical spot. In the case the claw gets overloaded, the dermis might get stuck at this spot between the back of the pedal bone and the sole horn. A sole ulcer most commonly originates from injuries or bruises which can coincide with laminites, local strain injury and foot rot edges. Sole ulcers are to be considered the final stages of sole hemorrhages.

This is a very painful disease, whereby the laminar corium by a constant overtaxation can start to bulge en gets stuck. If nothing is done about the sole ulcer, an inflammation can start that might continue inside en starts to deteriorate the deep flexor tendon. In its worst case scenario the tendon can tear because of this. A bovine animal with a sole ulcer will wherever possible try to relieve the claw which has the sole ulcer by using a wide base position and by trying to keep the legs slightly stretched. As with all claw disorders, the animal will spent much time lying down.

Prevention of a sole ulcer is to be done by prevention of foot rot, laminitis, sole haemorrhages and injuries from the outside. Preventive trimming of the hooves by at least 2 times a year can reduce excessive horn growth at the lateral claws and reduce foot rot degradation hereby limiting the likelyhood of sole ulcers to start growing. In terms of housing one should pay attention that the cows can lie down sufficiently (10 – 14 hours/day) to relief the hoofs. Rubber topped floors will also prevent a considerable amount of sole ulcers. 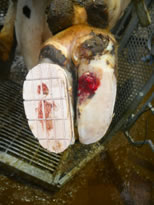